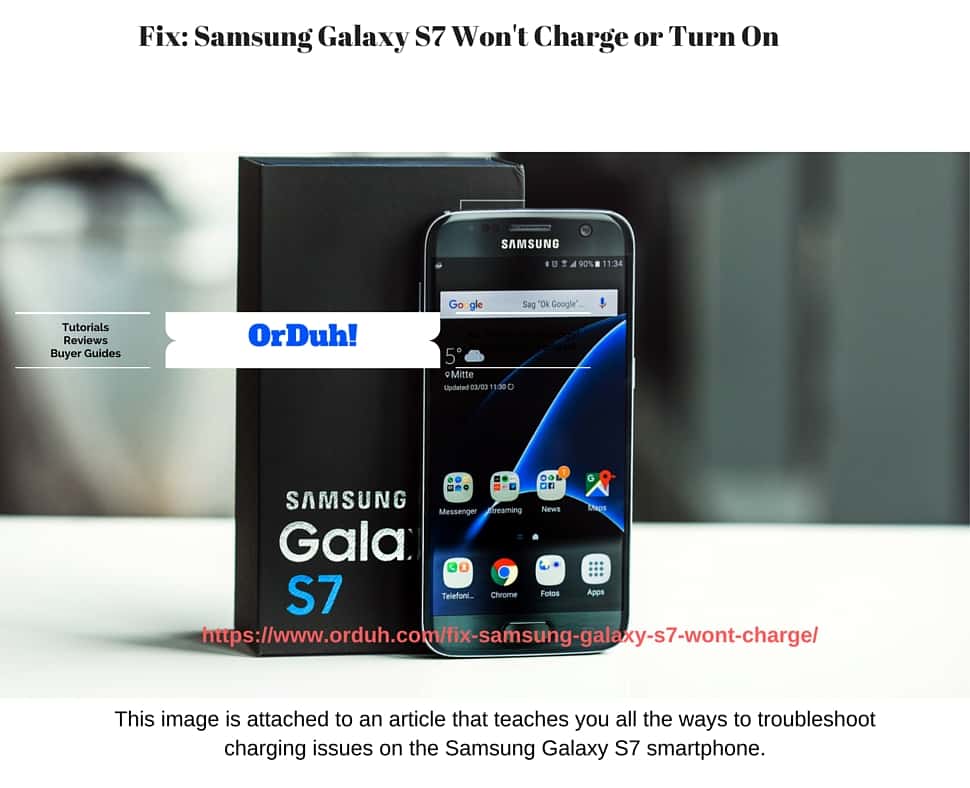 This image is attached to an article that teaches you all the ways to troubleshoot charging issues on the Samsung Galaxy S7 smartphone.

This guide teaches you what to do when your Samsung Galaxy S7 won’t charge or turn on. Many Galaxy S7 users face Galaxy S7 slow charge issues. Furthermore, sometimes the S7 does not charge at all.

Today, in the next few minutes, you learn about possible solutions to fix a Samsung Galaxy S7 that won’t charge. Before you move on, if it is that you experience fast draining battery life, then this article provides fixes. If your S7 doesn’t charge then, continue reading.

Things you should know about charging the Galaxy S7

Don’t charge your S7 near water or in excessively hot or humid conditions. Also, do not overcharge your S7; charging overnight when your battery only needs two or three hours is a bad idea and leads to a battery exploding or damaging your S7. Your device has a cut-off switch for your battery, but sometimes this doesn’t work. Always make sure that you charge your phone for no more than the amount of time required.

If you replace your Galaxy

S7 charger or cable, be careful. There are many cheap third-party chargers that went bang in the middle of the night or turned smartphones into toast. As with any electrical equipment, make sure that anything you buy complies with all the relevant safety standards. Now, let’s get on with the tips!

Use the correct Galaxy S7 Charger

Make sure that you are using the Samsung charger and cable that came with the S7. Other chargers may have different voltage ratings, and they won’t always work with the S7. If your charger doesn’t deliver the right charge frequency, check that it’s the right charger. A charger from another device might not provide the right amount of power.

For example, a charger for a Bluetooth headset

won’t put out as much power as one designed specifically for smartphones. In the case of the Galaxy S7, use a Galaxy S7 fast charger

Charge the Galaxy S7 for a while before turning it on

As a rule of thumb, allow your Galaxy S7 to charge for about 30 minutes. Do this before you attempt to use the S7. 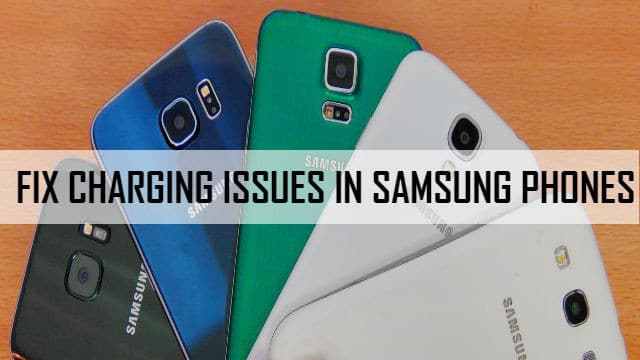 Read on for more tips to fix a Galaxy S7 that is not charging.

and use the cable and charger on a different device to make sure there are no faults with the charging apparatus. Try a different charger and cable with the same voltage rating. Note: Charging from a wall socket always charges faster than via PC or laptop. Most computers’ USB ports don’t deliver very much power.

A wall outlet produces twice the power than that of a USB port. In the case of fast chargers

, it gives as much as five times the power — which means much, much more quickly recharging.

Charge the Galaxy S7 via USB/PC

Try plugging the S7 into a USB port on your PC or laptop. Although, it will load much more slowly using the USB port than from the charger connected to the wall. Phone Companion displays the amount of charge your Galaxy S7 receives. Also, Phone Companion details available space (both internally and externally).

For further reading, check out:

Inspect the Galaxy S7 charging port. Is the charging port choked up with dust & debris? Yes? Often, a simple glance reveals nothing. With a can of compressed air, blow out the offending irritants and get your USB connection back to normal. If you don’t have access to a can of air, then blow (not spit) into the charging port.

Do you know what one of the quickest, easiest, and often most successful solutions? A little DIY repair on your Galaxy S7 hardware. The metallic surfaces inside the USB port and the micro USB charger does not make proper contact. Through a manufacturer defect or because of the continual plugging and unplugging of the charging cable caused a severed connection.

There are a few other things that you can try if you still need help. Click through for more. But first, see the video for charging port repairs. You can buy a replacement Galaxy S7 charging port and repair it yourself.

Update or rollback the OS on your S7

Software updates and new Android versions can play havoc with your battery life. This effect occurs when upgrading an old device to current software. Newer smartphones oft take advantage of the latest OS. Highly optimized, bigger cells and pre-optimized hardware. However, a two-year-old smartphone struggles when it makes the jump from behind the pack.

If this happens to you, consider rolling the device back to an earlier Android version. Turning back your device, however, carries security risks. (The latest software versions always keep your device protected. The risk of operating your smartphone on an older version is often negligible, but it’s worth noting.)

Similarly, the Galaxy S7 battery life significantly improves after some updates. Does your Android software version require an upgrade? Head to the ‘about device’ page in your settings and check for an update or do so via Samsung Kies.

Using battery intensive apps/features while you are charging your device will affect how fast it gains battery life. Do you charge your Galaxy S7 while Skyping etc.? In this case, the Galaxy S7 naturally takes longer to load. The Galaxy S7 charges faster when locked with Wi-Fi and 4G turned off.

Switch the Galaxy S7 into airplane mode, or off completely. Turning the Galaxy S7 off during charging produces the fastest energy boost. If it still isn’t working, then try a replacement battery

. Also, inspect the USB dock. Ensure that you do not have a broken charging port.

If, at the end of this tutorial, you can’t repair your Galaxy S7 charging problem, contact your retailer. Furthermore, your mobile carrier or Samsung can also give advice. If you’re out of warranty, then you can try buying a replacement charger

or even replace the charging port

Don’t know what you are doing? To troubleshoot a Galaxy S7 that is not charging, probably best to take the device to a professional. Have the technician do the repairs for you. Thanks for reading this how to fix a Samsung Galaxy S7 that won’t charge tutorial. If you found the information useful, then please share it with your friends.