What is an Active Directory Domain?

What are Forest Functional Levels?

A forest is a collection of one or more domains which may have one or more trees. What makes a forest unique is that it shares the same schema. The schema defines what and how Active Directory objects are stored.

A forest is a collection of one or more domains which may have one or more trees. What makes a forest unique is that it shares the same schema. The schema defines what and how Active Directory objects are stored. The schema defines the database for the whole forest but it should be remembered that each domain in the forest has its own copy of the database based on the schema.

How to Check Domain and Forest Functional Level 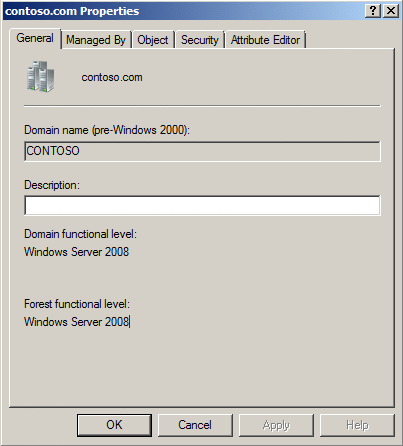 Active Directory: How to Check Domain and Forest Functional Level

How to raise Active Directory domain and forest functional levels

This article discusses raising the domain and forest functional levels that are supported by Microsoft Windows Server 2003-based or newer domain controllers. There are four releases of Active Directory, and only the levels that have changed from Windows NT Server 4.0 require special consideration. Therefore, the other level changes are mentioned by using the newer, current, or older versions of the domain controller operating system, of the domain, or of the forest functional level.

Functional levels are an extension of the mixed mode and the native mode concepts that were introduced in Microsoft Windows 2000 Server to activate new Active Directory features. Some additional Active Directory features are available when all the domain controllers are running the newest Windows Server version in a domain or in a forest, and when the administrator activates the corresponding functional level in the domain or in the forest.

For more information, view the TechNet article about the features associated with the various functional levels.

For more information about how to use Windows PowerShell script to configure the functional level, view the TechNet article that discusses this method.

The Lightweight Directory Access Protocol (LDAP) tools such as Ldp.exe and Adsiedit.msc can be used to view and to modify the current domain and forest functional level settings. When you change the functional level attributes manually, the best practice is to make attribute changes on the Flexible Single Master Operations (FSMO) domain controller that is normally targeted by the Microsoft administrative tools.

After you use the Lightweight Directory Access Protocol (LDAP) tools to edit the functional level, click OK to continue. The attributes on the partitions container and on the domain head are correctly increased. If an error message is report by the Ldp.exe file, you can safely ignore the error message. To verify that the level increase was successful, refresh the attribute list, and then check the current setting. This error message may also occur after you have performed the level increase on the authoritative FSMO if the change has not yet replicated to the local domain controller.

Quickly view the current settings by using the Ldp.exe file

Requirements when you manually change the functional level

There are a number of considerations when raising the operating system level of the domain controller. These considerations are caused by the storage and replication limitations of the linked attributes in Windows 2000 Server modes.

Because of the efficiencies in group replication that is activated in the interim level, the interim level is the recommended level for all Windows NT 4.0 upgrades. See the “Best Practices” section of this article for more details.

The following section discusses the best practices for increasing functional levels. The section is broken into two parts. “Preparation Tasks” discusses the work that you must do before the increase and “Optimal Paths Increase” discusses the motivations and methods for different level increase scenarios.

A domain controller may appear in the list for any of the following reasons:

Inventory the forest for earlier versions of domain controllers.
If an accurate server list is not available, follow these steps:

For more information, click the following article number to view the article in the Microsoft Knowledge Base:

Verify that End to End replication is working in the forest

Prepare a back-out plan that includes of one of the following actions:

Before the back-out plan can be used, all domain controllers in the forest must be decommissioned before the recovery process.

Note Level increases cannot be authoritatively restored. This means that all domain controllers that have replicated the level increase must be decommissioned.

A reason to avoid using interim mode is if there are plans to implement Windows Server 2000 domain controllers after the upgrade, or at any time in the future.

In mature Windows NT 4.0 domains, security groups that contain far more than 5000 members may exist. In Windows NT 4.0, when a member of a security group changes, only the membership single change is replicated to the backup domain controllers. In Windows Server 2000, group memberships are linked attributes stored in a single multi-valued attribute of the group object. When a single change is made to the membership of a group, the whole group is replicated as a single unit. Because the group membership is replicated as a single unit, there is a potential for updates to group membership to be “lost” when different members are added or removed at the same time at different domain controllers. Additionally, the size of this single object may be more than the buffer used to commit an entry into the database. For more information, see the “Version Store Issues with Large Groups” section of this article. For these reasons, the recommended limit for group members is 5000.

If the administrator does not select the interim level for the upgrade domain, you must follow these steps before the upgrade:

Windows Server 2003 interim forest level relieves administrators from having to discover and reallocate global security groups with more than 5000 members.

The storage location for these queued changes is referred to as the “version store,” and is approximately 100megabytes. The size of version store varies and is based on the physical memory. If a long-running operation does not finish before the version store is exhausted, the domain controller will stop accepting updates until the long-running operation and the queued changes are committed. Groups that reach large numbers (more than 5000 members) put the domain controller at risk of exhausting the version store as long as the large group is committed.